Count Duckula the 17th (Full Name)
Duckyboos (By Nanny)
Milord (By Igor)
Young Master (By Igor, Nanny)
You Monster (By Goosewing)
You Fiend (By Goosewing)
Feathered Prince of Evil (By Narrator)

Behind the scenes information

The Zombie Awakes
Count Duckula (full title: Count Duckula the 17th, as stated in the episode 'The Count and the Pauper'), is the main character of Count Duckula. He is a short green duck with black parted hair, traditional vampire evening wear, complete with a cape. He has no fangs, although his more old-fashioned relatives do.

As his name suggests, Count Duckula himself is very loosely based on the titular character of Bram Stoker's Dracula, and is essentially a subversion of the vampire trope.

Duckula is a vegetarian vampire duck, coming into the world as an accident. Unlike his family and ancestors, he has no bloodlust, as when he was reincarnated, blood was omitted and replaced with ketchup. He is actually quite cowardly, with a distaste for blood and gore, to Igor's disappointment.

Although he retains some vampiric powers and qualities (such as teleportation and an image invisible to mirrors), common vampire weaknesses such as sunlight, silver, and garlic have no effect on him, as he is not a "traditional" vampire. In the episode 'Dr Goosewing and Mr Duck', Duckula briefly turns into a "proper" vampire, desiring blood from the villagers outside the castle, but he turns away from the door when he discovers that the sun is still out.

As the theme song states, Duckula is rather zany. Energetic, good-natured, and ambitious, he is prone to short-lived obsessions that sometimes form the plots for episodes, such as attempting to become a blues musician in New Orleans, prospecting for gold, or becoming a cowboy or performer. He likes to make puns and jokes, and on occasion has the same sarcastic edge that Igor does.

He has a very modern outlook, and despairs over the traditional vampire image he is expected to embody. In the episode 'Family Reunion', he is willing to go as far as contacting Dr Von Goosewing to help him destroy his own family. He hates living in a dark, gloomy castle, and finds the behaviour of his servants to be depressing. Duckula frequently expresses frustration with Igor's lecturing and attempts to change him into a proper vampire, as well as Nanny's simple-minded and clumsy nature. Still, he keeps them around, suggesting that he really does need them. Quite a few times he admits to missing Nanny while she's gone, and he always takes his employees back at the end of the day.

Despite his positive qualities, Duckula is very immature, egotistical, and selfish, taking his lifestyle and employees for granted. He can be quite childish and rash, acting almost spoiled, despite his lack of riches. That also drives his avarice, a frequently occuring trait that has him and his staff scrambling for money. He does try to act refined and mature, which shows in his speech and fake attempts at modesty.

Duckula has lived quite a few lives before this. The episode 'Dear Diary' shows what is his great grandfather, and 'The Rest is History' shows previous lives as an ambassador, a knight -- and simply, a count. In fact, the first Duckula was no vampire at all, but a polite young count who was bit by a vampire bat.

The character differs considerably from his predecessor on the 'Danger Mouse' series. In fact, the only similarities, other than the name, is they are both vampire ducks with ambitions in show business with little actual talent. The previous version of Duckula was an evil villain, willing to blackmail and force his way into stardom (as opposed to the current Count, who merely tries to get in the legitimate way) and was fixated on being a television star, rather than settle for fame in some other branch of entertainment. He has far greater magical powers and makes much more use of them. He has a thick accent consisting of lisping, stuttering and occasional squawks.

Appearances in Other Media

Though Count Duckula appears primarily as the main protagonist of the Count Duckula cartoon series, as well as the comics and merchandise based on it, however he has made appearances in other media as well. 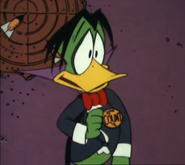 The one and only Count Duckula 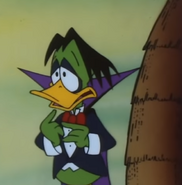 A sombre Duckula in 'Transylvanian Take Away' 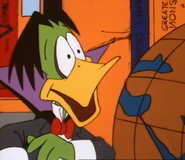 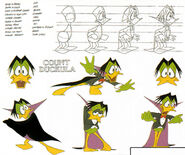 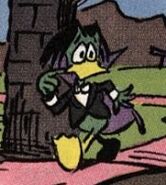 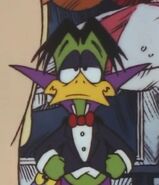 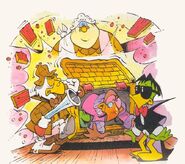 Count Duckula as he appears in the comics

Duckula as he appears in Victor & Hugo: Bunglers in Crime 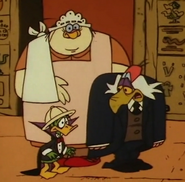 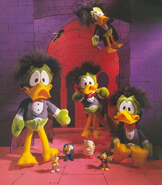 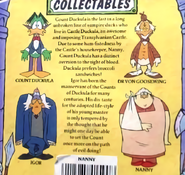 Add a photo to this gallery
Retrieved from "https://countduckula.fandom.com/wiki/Count_Duckula?oldid=5384"
Community content is available under CC-BY-SA unless otherwise noted.